Understanding the Canon in Art

This lecture introduced the notion of the "canon" in art. At the time my only understanding of the word was as an instrument of war or the liturgy of the Catholic Mass. I had not come across the word in the context of art.
Since when of course I have bumped into the word a number of times, not usually in a context which sank in. 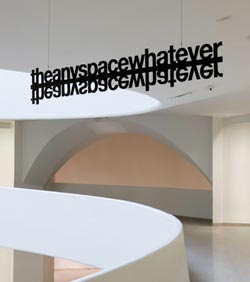 Today I was reading an interesting article in Art World [1] which referred to a new exhibition in the New York Guggenheim.[2] Described as ground breaking and titled "theanyspacewhatsoever", the exhibition involves 10 artists, Angela Bulloch, Maurizio Cattelan, Liam Gillick, Dominique Gonzalez-Foerster, Douglas Gordon, Carsten Höller, Pierre Huyghe, Jorge Pardo, Philippe Parreno and Rirkrit Tiravanija. They describe themselves as individuals but the art world describes them as part of a new "ism", "Relational Aesthetics", an association they have endeavoured to deny.

They are artist who have renounced the production of individual objects replacing these instead with the medium of the gallery or museum space. This they use individually or in loose collaboration to create "artwork" which creates a social environment in which people come together to participate in a shared activity".[3]

Critics, academics, curators and collectors have endeavoured to pigeon hole these artist alongside the YBA (Young British Artists) of the 1990's, considered to be the foundation of the "ism", "Relational Aesthetics",

Guggenheim curator Nancy Spector gleefully suggests the collaboration of these artists in this unique event justifies their addition to this canon!

I feel that reading this article has clarified my understanding of the notion of the term canon in the context of art.

One of the growth areas of the Internet is streaming video not least in the art world. There are sites covering exhibitions, gallery shows, artist interviews, art world events, etc. The quality of the output can be a bit variable and maybe dependant on the quality and speed of your broadband connection. Top of the pile is probably BBC iPlayer with Google Video at the other end, there are many in-between.

There are also sites either specialising in art video output or who include a significant content on their sites. One of the more interesting dedicated sites is NewArtTV others include VernisageTV, LXTV. The art magazines ArtReview and ArtInfo both have significant video content on their websites. The current streaming video phenomenon of the Internet, YouTube includes a number of dedicated art channels one of which is operated by the controversial character James Kalm. An exciting find was a YouTube channel under the name of deepsofnight which contains lots of goodies including Robert Hughes's Shock of the New.

The association between art and streaming video is only scratching the surface of the mediums potential, we are watching this space with interest.
Posted by AJPEE at 3:15 pm 0 comments